I, Heidi, got to know Dr. Barbara von Meibom in the German speaking integral community, represented by the “Integrales Forum” . I was impressed by her expertise and by the way she is presenting herself and working in the world as a woman of my own generation. She was born in a family where leadership was a natural thing, as in other families it is music or in mine becoming a teacher.

As many women Barbara had entered into her career in ways which are typical for men. After severe health issues she realized that “feminine leadership” needs to look different if women don’t want to become simply a clone version of male practices by giving up their femininity with all the desastrous consequences on the personal, but also on the global level. Women who increase the masculine energy by becoming themselves like males add to the present problems instead of healing them by balancing the energies of both types.

Accordingly Barbara focused on developing new models for leadership where women can grow up and lead as women, in their own specific ways which are being explored in the cutting edge level of society. 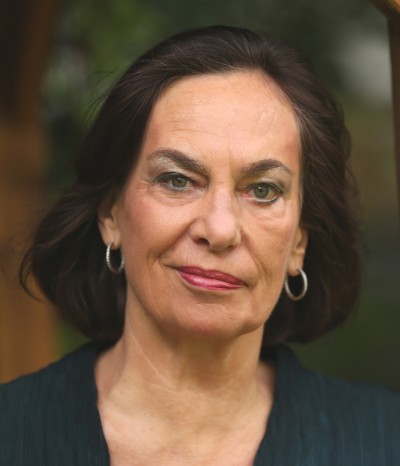 Time Stamps: WHERE to find WHAT in the full video

06:20 Power is energy, and energy by itself is neutral.  Women often identify with the powerless.  How can we give a positive mastery to our power?

08:13 Spiritual self-management and the “dimming down” of womens’ and girls’ power so that a search begins to find a “sneaky” unconscious way of expressing power.

11:50 Women unconsciously blame others, but first find themselves to be victims.

13:13 What is empowerment?  Then using it in a masculine or a feminine way!

15:30 Integrating both masculine and feminine in BOTH men and women: several examples

17:25 The need for balance, which can lead to optimal power, some examples: Gerda Lerner, the historian, vs Margaret Thatcher.  (Angela Merkel is integrated but lacks a strong feeling of connectedness)

21:05 (Message from Jon Freeman: watch our first conversation with Jon HERE)) “What would we need for female leaders not to be “pretend” men (like the current UK PM?” More examples

24:27 Men and “exchange use” women and “value use”.  Not selling food but feeding children!

28:20 The desire of all of us, both men and women, to become whole, but each sex starts from “primary” hormone bases until ages 40 or 50.

30:35 The “wisdom” hormone. The 3 goddesses: white, red and black plus the need for reconciliation between daughters, mothers and grandmothers. How women can sabotage efforts to reach balance.

32:55 Example from a workshop of male and female police, including high ranking where high ranking women stopped some really good ideas for including some feminine approaches.

34:32 The story of Solomon and Sophia in the Bible illustrating the role of steward: women know the directio but men know how to get there.

38:00 Both Heidi and Barbara say they “tried” to become men when younger.  How that changed in Barbara’s life.
39:00 Barbara credits her facialis paralysis as her greatest teacher re: the need for balance and the need to listen to the stories we tell ourselves. Then tell ourselves another, more empowering, story.

43:40 Acknowledge the perpetrator within and forgive yourself. Mark relates this to his own history.

46:17 Another suggestion: Non-Violent Communication and how that works

49:30 Assagioli: I have a feeling but I am not that feeling. (See Heidi’s introduction to Assagoli’s ideas HERE)

51:40 Barbara’s current work in Communio with her two colleagues.  She explains the need for a mental/logical approach to find the right words to the feminine principle. She also works with men and regrets the lack of rituals – and knowledge that there are passages to commemorate in our lives.

57:00 “The post modern society has kicked out rituals…” which are messages to our souls.  The language of our souls.

58:30: Martin Ucik in a message asks a big question which Barbara tackles anyway. She notes the interplay between changes in society and regulations that promote changes.

1:02:10 Wrapping up, Mark’s take away and barbara’ s comment on that for another talk.  Heidi calls also for balance and a need to look at mens’ problems. Which prompts a response to cooperation and balance from Barbara. Stuff for another show!

Women are powerful but not very often in power. In Germany we have a woman as a successful chancellor, in a few other countries in the world there are women in the highest office of the country. Is it by chance that there are so few? And that some of them are not seen as “good women” because they are harsh and seemingly uncaring like the “iron Lady” Margaret Thatcher.

Is this the type power which makes a woman powerful? The direct power over others and the development of the world seem to be a highly desired position of men – we see a new example in the 45th president of the United States. For women “power” is often expressed in a different way. Traditionally it was the power of seduction and manipulation of men. As more evolved women, today we are looking for ways to contribute to the world with our innate “feminine power” which enables us to act in the world in an holistic way. We can use our gifts for caring and for creating and curating relationships in order to create new ways of leadership and “power”.

Our guest Dr.Barbara Meibom has created COMMUNIO – the Institute for the Art of Leadership. She has been pioneering ways of communication which create relationship and mutual appreciation which allows the emergence of powerful solutions to problems.

In our conversation, we want to ask Barbara how she sees the evolution of the present power structures and how “feminine power” can become an integrated part of leadership at all levels of human life, in the interior and in the exterior world.

Prof. Dr. Barbara von Meibom has been teaching Political and Communication Science at the Univ. Duisburg Essen in Germany. She is founder of Communio–Institute for the Art of Leadership in Berlin with Senior Coaching and trainings in Spiritual Coaching, Self Awareness, Mindfulness and Spiritual Self-Management. “Dem Leben dienen – to serve life” is her commitment. Extensive studies in India led her to a synthesis of eastern and western spiritual traditions. She is a spiritual teacher and spiritual coach, teaching internationally. Barbara v. Meibom has published more than a dozen books and gives talks in Germany and abroad. At the 2016 IEC Conference in Hungary she was part of the hosting team and – together with Bence Ganti and Peter Kémeny – she led the European Constellation
She had the same role at the German Integral Conference in June 2017 in Berlin

Barbara v. Meibom was born into a family, were women always took a leading role in their stand for women rights. For herself it was clear that she did not want to limit herself to this agenda. So she started a “masculine” career with “masculine” topics until she got to understand that she had chosen a dead end for her personal development. This led her to a profound reorientation in her personal and professional life.

Looking back now to more than 40 years of her professional career the topic of Women and Power and Female Wisdom is of genuine importance for her. So the talk might relate to the following issues: Reshaping the notion of power; empowerment of women; letting go the victim role; development of a feminine consciousness which is more than prelingual and capable to differentiate and express itself verbally; bringing the female principle into the political, social and personal agenda. Barbara v. Meibom works on a 1:1 basis on these topics as well as with groups and with further trainings.

CLICK ON THE LINKS BELOW FOR BARBARA’S BOOKS (in German)

THE VIDEO DIVIDED INTO 5 PARTS

Find the recording of the live conversation with comments from the audience above. In the TIMESTAMPS you can search for what topics are most interesting for you and where to find them in the full video.