The Integral Oratorio with Steve Banks 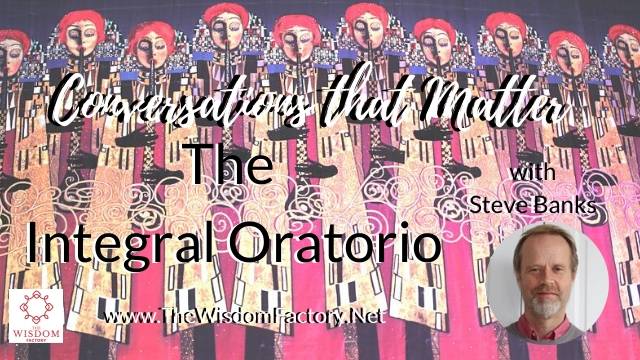 Over the last 6 years, Steve has composed a major new choral work, “Blue Pearl: A One World Oratorio”, inspired by a deep desire to convey Ken Wilber’s Integral vision through the beauty and power of music. We will talk about how Steve came to write this ground-breaking piece, what makes ‘Integral’ music ‘Integral’, and the world premiere which will be on 27.2.2021.

What is “Integral Music”? Is an “integral oratorio” different when composed by an integrally informed composer? Can music be seen through the lens of integral theory? And what is the “integral” part of the composition?

These questions are subject of the conversation with Steve Banks who is planning the premiere for the coming year. In the meantime we can listen to demo recordings of single parts. (see links below). Listening can open your understanding and the inquiry into how an integral worldview can impact arts, especially music. (previous and future conversations on Arts and Music HERE)

2:00 Steve about himself and how he came to integral. His widespread musical interests.

4:00 The development to new spiritual music, requiems – inspiration to write an in tegral requiem.

5:55 Sample recordings of the oratorio. Heidi shares her impressions when listening to his music

8:10 Steve about his work: how it came about: Put the Spectrum of consciousness into music.

9:00 A short introduction of the Wilber Model of integrating psychology and spirituality. Steve desires to introduce people to the integral map by means of his music.

12:55 Steve’s experience on the power of music. Music is an integral form. A holarchy when performing. Being together in synergy. Difference between soccer and music. Sense of unity which transmits to the audience.

17:00 The step into the unknown. “Anamnesis”: setting in music of Wilber’s “One taste” Unforgetting = remembering.  Music evoking the feeling of the different stages of consciousness, different musi styles

20:50 Heidi explains the model. Wilber I as opposed to later versions of the theory: the Wilber-Combs matrix, stages and states.

26:40 Sex and death, movements. Sexuality and spirituality belong together. The eye of flesh, the eye of mind, the eye of spirit – the eye of heart.

30:00 You can listen to the sample music at Steves Website, including the texts and descriptions. www.stevebanks.info  “Blue Pearl – the One World Oratorio”

31:10 About the planned premier  performance. In Dartington UK, in need of a choir and a certain style of solo singing.

33:40 Steve plans Crowdfunding and asks people to support his project.

34:40 What is integral about Steve’s composition? What is your voice as a composer?

37:40 Integrating factors: Silence. The U-Process. Steve’s music is a series of “U” s. Specially in the piece “Death” Buddha nature, Christconsciousness is found NOW in the music. Silence in “Be still” and then a whole piece just silence, like “4 minutes 33 secunds” by John Cage.

44:15 Blue Pearl Oratorio is like a guided meditation. A comparison of requiems. Steve’s requiem wants to point out, that peace  (or God) is here, if you turn towards it.

48:00 Heidi: Music has the power to lead you to find access to feeling, intuition, inner self – if we are open for that.

54:25 Steve’s work as a Phd? It is not just a music composition!  Steve’s intention is thte music and be moved, and then maybe get interested in  Integral.

57:00 The challenge is to get this piece performed and listened to! The request for feedback and sponsorship.

58:45 Steve refers to Stuart Davis and Brooke McNamara, Alex Grey, Jand other integral artists. Are there others around?? Cultural/artistic side is not yet much present in Integral.

Steve Banks is a musician, Integral composer and workshop leader. He has performed with many ensembles from the London Symphony Orchestra to the Carnival Band. He has played for rituals based on Dagara traditions, and has co-led Rites of Passage for men. His major new composition, an ‘Integral Oratorio’, is the first of its kind. He has been an Integral and meditation practitioner for 25 years. He has created the experiential course ‘Demystifying Mysticism’ based on Wilber’s work. www.stevebanks.info 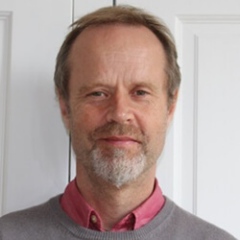 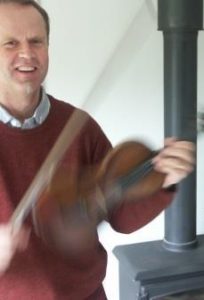 The page where you can listen to the whole demo recording of “Blue Pearl: A One World Oratorio”: http://www.stevebanks.info/integraloratorio/blue-pearl-listen/

The slides from Steve’s IEC 2018 presentation on Integral Music: http://www.stevebanks.info/integral-european-conference-2018/integral-music-slide-presentation/