The Science of Possibility – The message of Jon Freeman

By Adelheid Hornlein|2018-04-22T20:07:59+01:00November 18th, 2016|BLOG, integral theory|1 Comment
Jon Freeman is  a “regular” scientist who,at a certain point in his life, understood that science, as it is still practiced today in main-stream, is much too limited for to give good answers. Rupert Shaldrake in his book “Science Delusion” point out clearly (and with scientific accuracy) that the science practiced still today and taught in University is a BELIEF SYSTEM and has abandoned the principles of science all together.

In our video conversation with Jon Freeman we talk about the “scientist’s awakening” and the new understanding what REALLY is possible, when we leave the limiting beliefs behind us.

Some points addressed in the video:
6:30 First question: Homeopathy? An example of the big leap
8:40 Jon moves to the Big Picture and the constraints of Science
10:00 a plug for Nassim Haramein
11:00 “ ‘Everything is Energy’ is both true and useless.”
11:25 The central theme of the book is…what makes energy behave as it it does?
12:00 What about shamanism, psychic experiences, nature “spirits”
14:20 Bringing physics back to the biological level and consciousness…more than just expanding consciousness (which is just 20%)
15:50 The role of unstable electrons in the body
16:33 A core concept
17:45 The relation we have with the information in the Universe – with an illustration using Jon’s initial experience of psychic phenomena
20:00 “What kind of Universe has to exist for that to be possible?” No boundaries to spacve and perhaps to time
22:20 How is this different from “wo-wo”? Jon’s gives an example with random numbers
24:30 “12 trillion to one” and the butterfly effect
26: 20 “People have always known this.” “We are the drop in the ocean”
28:30 “How can we know how to do this” and Jon’s new project.
30:38 Getting past linearity and the journey into the heart with its own field
34:07 More examples: early successful healing of Aids in the 1980’s 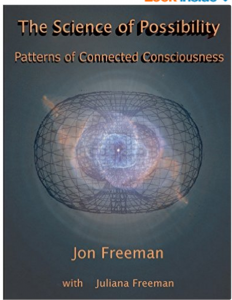 About Jon Freeman
Jon Freeman is a writer, trainer, and mentor with a background in organizational, systems and change management working with Spiral Dynamics Integral, SQ21 Spiritual Intelligence, Meshworking, and Conscious Capitalism. He is a Director of the UK Centre for Human Emergence.
His books include:
Future Money; Evolving Relationship with our Finance
and the focus here: The Science of Possibility

Get the book The Science of Possibility by Jon Freeman

Quoting Jon Freeman:
I think that we have been slow to recognize that second tier thinking won’t bring us answers.  We won’t know what to do in advance because the non-linear nature of what is out there makes it a chaos field.  You can’t pre-cook the solutions, you can only get into the chaos field and emerge them.  It’s a live gig not a recording.  Maybe we haven’t been ready to do that, because we were brought up to think we must know before we do.  Conscious Evolution means that we do before we know, and we know by doing.  It means that you take in to your hands your expertise, your sensing and intuitive skills, your pattern recognition, your understanding, your beingness, your chosen toolkit and above all your courage.  Don’t wait for academic approval of your theory – that’s not worth a damn and will arrive decades too late.  Don’t wait to qualify – you will never be qualified for the turmoil that is building.  You are as ready as you ever will be, and you will only get better by practise.  Conscious Evolution is interactive and generative.  It’s playing in the field of 4-quadrant possibility.  It’s adapting moment by moment.
Go on, be an app.  Be and do; adapt and collaborate; thrive and help thrive.

About the Author: Adelheid Hornlein